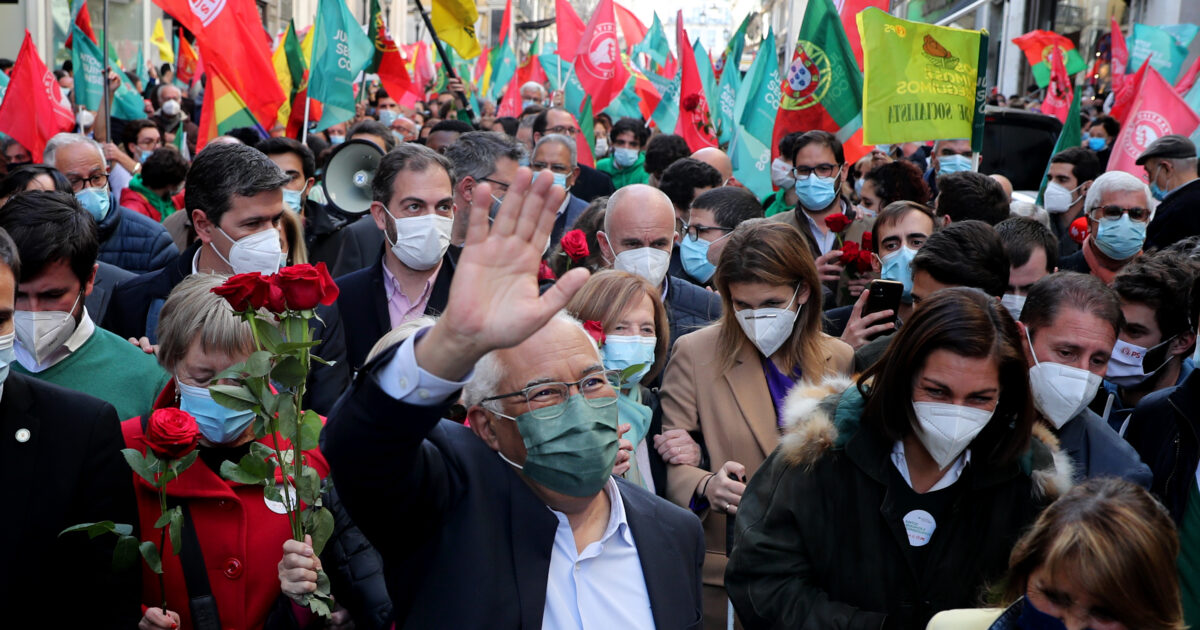 What can the left learn from the elections in Portugal?

Last weekend’s general elections in Portugal signal what could happen as we enter a world acclimated to the pandemic, but still grappling with its consequences. The historic victory of the center-left Socialist Party (PS), which won an absolute majority in parliament, heralds the start of a new political cycle: one in which the polarization of the past five years has now frozen into a few camps.

On the one hand, there is a convergence around the centre-left parties which have somewhat shunned their neoliberal tendencies of the early 2000s and embraced (with more or less enthusiasm and conviction) their socialist legacies. On the other, a right divided between a classic globalized capitalist-individualist offer and a growing national-populist movement with something to say about collective identity. These political desires reveal some fairly obvious needs of the electorate, including a desire for political accountability, calls for social betterment, and a desire for some sort of paradigm shift.

For progressives across Europe, Portugal is also a cautionary tale. Collective seats held by left-wing social-democratic parties fell from 36 in 2015 to less than half last weekend. Organizations like the Communist Party (PCP) and the Bloc des gauches (BE) were de facto in government between 2015 and 2019. Today they constitute (with the help of a single MP from the ecosocialist party LIVRE) the same number of legislators in parliament. such as the far-right Chega party.

They say hindsight is 20/20, and it may be an easier article to write now that the disaster has happened than in recent years when the left’s closeness to power has gave people, in Portugal and beyond, hope for better things to come. But the results, dismal as they may seem, were not entirely unexpected.

This time last year, Portugal turned to the polls for the first time since Covid-19 hit Europe’s westernmost coast to re-elect President Marcelo Rebelo de Sousa – a mild-mannered conservative turned television expert – with almost 61% of the vote. In third place, André Ventura, the megalomaniac chauvinist at the head of Chega, with nearly half a million votes. In contrast, the combined vote for PCP and BE was less than 350,000. As I was writing for Novara Media at the time, the left has shown itself to be “wise” in the face of these results. Instead of swearing to bring about a better future, “no one has spoken about what the future holds. Nobody has committed to face Chega. Nobody mentioned the upcoming fight.

The Carnation Revolution of 1974 saw both the defeat of fascism and a sea change in class consciousness in Portugal. With the far-right’s gains in last weekend’s elections, the left in Portugal – and beyond – must learn from its history, argues @JoanaRamiroUK https://t.co/LGnNgN0pZL

In the history of political alliances, radical forces rarely emerge victorious when aligned with reformist parties. Examples are as infamous as Leon Blum’s Popular Front government in France just before the end of World War II, or as little known as the Greek left-wing coalition Synaspismos and its participation in the 1989 “universal government” which put in power a technocrat with the support of the center right. Admittedly, things did not end well for the representatives of the working class. This is not to say that the radical left should not sometimes cooperate with the center, especially in times of crisis or in the face of the threat of fascism. It just means that while these experiments have been done before, many of their lessons seem to have been forgotten over time.

To succeed during and after a coalition with the center, the left must use its time of collaboration to forge its own political identity. It is not a contradiction in terms. When the Communist Party and the Left Bloc forced the PS into a government deal on supply and demand in 2015, they did so because without their votes in parliament, the Socialists could not govern. The same could not be said after 2019, when the minority PS government left much more room for manoeuvre. Portugal’s economic recovery and government approval ratings have come thanks to the radical left and its valiant efforts to protect public services and invest in the welfare state. In fact, Portugal’s success sometimes came despite certain socialist policies that encouraged foreign capital to plunder the country’s resources and exploit Portuguese and migrant workers for juicy profit margins.

The opportunities to divorce the ruling party were there. The left, however, was often distracted by the narrative preached from the center and encouraged by the media that opposing the socialist government was tantamount to enabling a conservative agenda, perhaps opening doors to the far right. This fear became particularly acute when in 2020 the centre-right PSD formed a coalition with Chega in the autonomous region of the Azores in order to bring down the minority PS government. While the relationship proved tumultuous, PSD assurances that such deals would not take place in national elections seemed questionable. Over the years, the left has felt like a backseat driver for an increasingly confident Socialist Party.

For the Communist Party, the rehabilitation process should and will be easier. He can draw on his ideological conviction, core loyalties and tradition while exploring what it means to be a Marxist-Leninist in the 2020s. Indeed, the PCP is in a period of renewal, with a wave of young members pushing the party in new directions. They have at least three very capable candidates – including a very telegenic former MEP – to lead the party once 74-year-old steelworker Jerónimo de Sousa retires. And their new group of activists includes a wide and rich mix of ages and regional backgrounds, as well as gender and ethnic identities. For a party whose platform is often stuck in time, both in rhetoric and strategy, it could mean a new approach. And for a party that has lost many of its voters to the far right, that can and without a doubt be a good thing.

For the Left Bloc, there is now an uphill battle to rebuild its constituency. Many of his constituents have turned to the Socialists because they fear the rise of the far right and are quite happy with Prime Minister António Costa’s able leadership. None of these things are expected to change in the near future. Moreover, the Left Bloc, as an anti-capitalist party, now has to face another pernicious political force: the (neo)liberal Inciativa Liberal. In the immediate future, it is the number one target of the Left Bloc, because, as the writer Luhuna de Carvalho said recently“Today the greatest political threat is not the return of fascism, it is the birth of a radical center that fulfills the purpose previously assumed by fascism, legitimized precisely because it is not fascism.” It is the responsibility of the left as a whole to fight, hopefully together, the threat of fascism and the politics of hate. But for the Bloc, the answer to its rebirth is to become a force that will vehemently oppose the politics of privatization and profiteering. It must be vigilant, organize and denounce whenever the socialist government co-opts the politics of Iniciativa Liberal, masking precariousness and racketeering with buzzwords like entrepreneurship and “global investing”.

The Portuguese are crying out for a change in their material conditions and in the system more broadly. Their cries are echoed across Europe, where elections are reshaping the political landscape of countries. The left in these countries must learn from the failure of the Portuguese left and create an offer that credibly responds to these demands, either controlling the forces in power or positively distancing themselves from them until further notice.

Joana Ramiro is a journalist, writer, host and political commentator.