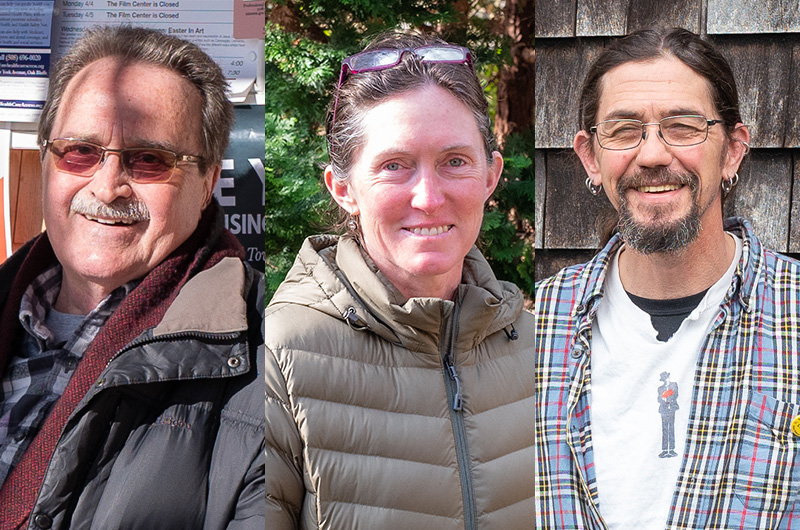 Three candidates are seeking a one-year seat on West Tisbury’s board, left vacant by the recent death of Kent Healy. The Gazette emailed questions to candidates. Their answers follow in alphabetical order and have been lightly edited for style and clarity. The municipal elections will take place on April 14.

Previous or current council service or other relevant roles:

I’ve had a lifetime of public service as a firefighter, EMT, police officer, assistant director of Edgartown emergency management, and a volunteer for Lee County Florida Emergency Operations, rewriting their blueprint mitigation for FEMA.

I have served on the Oak Bluffs Staff Council and Finance Advisory Committee, as Associate Commissioner of Seniors Affairs for Dukes County, and as an Aging Population Advocate, working with the various councils on aging.

What are the two or three most critical issues West Tisbury will face over the next three to five years, and what specific efforts would you make to address them?

One of West Tisbury’s top priorities is affordable housing. Help is needed to find ways to support not only our much-needed workforce, but also our children and our aging population. Maybe focusing on renting rather than owning could help make it actually affordable for more people. Currently, our population over 65 is 20%, but by 2035 it is expected to reach 35%.

Other communities are trying to build affordable housing in other ways, such as buying existing homes, improving them, and being creative in finding ways to finance them. At the end of the fiscal year, the money available is invested in affordable housing. We can no longer use the city property because the city will need the land, as we now find out as we seek to support the Island Council on Aging by bringing the Howes House up to code.

We must also make the necessary changes to prepare for our future, adapt to the rapid climate change that is occurring, and ultimately maintain our rural/agricultural way of life.

It’s a balancing act. My uncle Elisha Smith, president of Ag Hall for many years, taught me how to milk cows as a young boy and take care of his animals on his farm in Katama. We need to support our farmers in West Tisbury before their farms disappear. I am a member of the Ag Hall and hope to be more supportive of their efforts. Agriculture is another way to fight climate change and prepare because it empowers us. Support our local producers!

West Tisbury has plans to be fully renewable energy by 2040. Solar helps, but there is still a lot of work to do. Emergency Management will need to continue to work collaboratively with the rest of the island on the island-wide mitigation plan, reaching out more to MEMA and FEMA. State and federal funding is available to help us prepare, but only if we include the needs in our plans and then request the money when it is available.

I have the knowledge and willingness to listen to constituents and the integrity to serve on the West Tisbury Board.

What are the two or three most critical issues West Tisbury will face over the next three to five years?

3. The local effects of climate change, ie shoreline erosion, contamination of our ponds and increase in ticks and tick-borne diseases.

What specific efforts would you make to address these issues if elected?

None of these problems can be solved overnight. These are issues that require a multi-pronged approach and a multi-year plan. This is why this one-year mandate is a unique opportunity for me. I would have an extra year to learn and listen to people already working on these issues and be ready to make decisions over the next few years.

My past and current work experiences have given me many opportunities to meet the needs of multiple groups of people, whether it’s a band on the road, rowdy patrons in a nightclub, design needs of a one owner or multiple layers of event planning and coordination. , and the stability of physical structures. I learned to listen a lot and try to reach compromises that benefit everyone. And we should all be involved in decisions to move our city into the future.

Full name: Jessica DeRene Miller. DeRenne comes from my mother’s family, Audrey Straight (née Kuh) with roots in Savannah, Chicago and the DC area. Because I grew up in West Tisbury, many people in town know me by my maiden name, Jessica Burt, daughter of Richard Burt.

Occupation: Currently employed as a kitchen assistant at MV Charter School. I worked the previous five years as a Creamery Manager and Cheesemaker at Mermaid Farm & Dairy. Before that, I worked as a waiter and service manager at 7a Foods.

Previous or current council service or other relevant roles: I sit on the West Tisbury Board of Health and am running unopposed for a second three-year term. About ten years ago, I served on the West Tisbury Affordable Housing Committee for a short time before resigning due to family obligations.

What are the two or three most critical issues West Tisbury will face over the next three to five years?

Affordable housing, regional funding for the MVRHS construction project and responding to the currently tangible and imminent effects of climate change are extremely critical issues facing West Tisbury and the entire island community.

What specific efforts would you make to address these issues if elected?

If elected, I would be proactive in creating and supporting island-wide collaboration to solve our regional issues while looking after the interests and character of our town and the needs of West Tisbury residents.

Being the 12th generation of West Tisbury, having spent 45 of my 49 years living here, 31 of those years working, 22 of those years raising a family and getting to know a lot of people, I feel I have a perspective that would be valuable on the selection board.