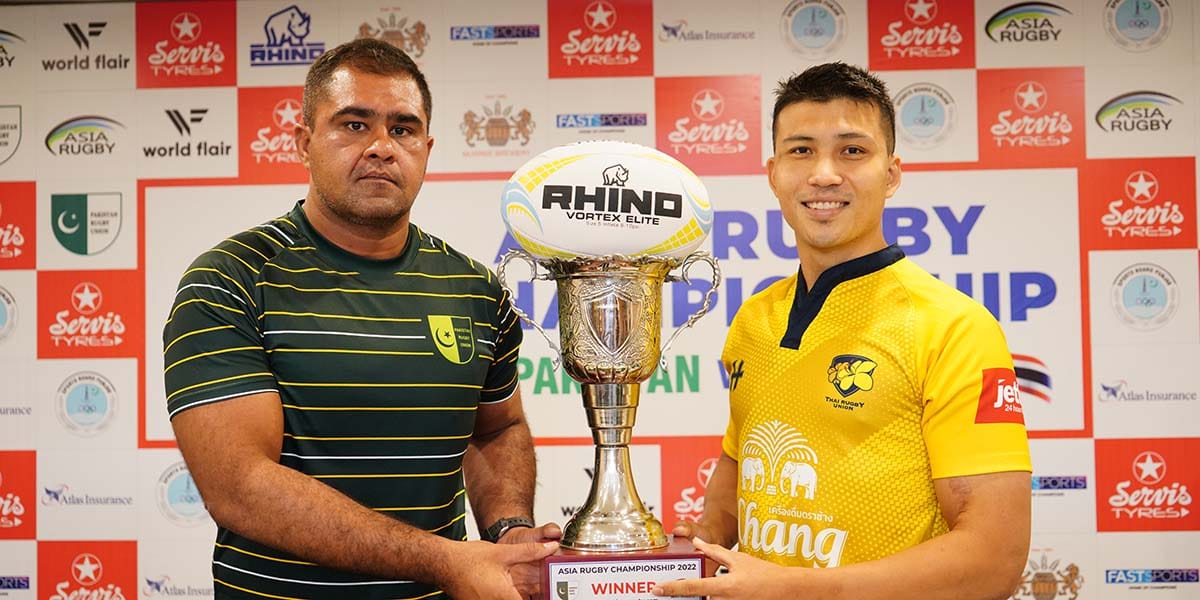 Pakistan and Thailand are all set to fight for a chance of promotion to Asia Rugby’s top-flight Championship in a two-Test Division II clash in Pakistan which kicks off on Sunday 29e May, with the second test to be played on 1st June 2022.

This stage of the Championship represents a milestone in Asia Rugby’s post-pandemic ‘return to play’ strategy: it is 1,064 days since Asia Rugby last held a test match. “Three years is a long time for a sport to be dormant. It’s great for Asia Rugby…to get back on track. If you want to grow the game you need to see big international clashes to showcase the best talent available. Giving players the opportunity to grow and compete against the best,” comments Pakistan head coach Gert Mulder.

Mulder, who is overjoyed at the prospect of his team’s return to the pitch, adds: “We have seen in my home country of South Africa that we have had a huge increase in the number of players at all levels to return to the rugby grounds after Covid. I believe we will see the same phenomenon all over the world. That said, I don’t think it was difficult to get the players back on the pitch; they want to play and they want to represent their country. The main concern was to bring the strength and conditioning of the players up to standard to prevent injury and prepare the players for combat.

Things are heating up in Lahore in every way as anticipation, preparations and excitement peak ahead of the first test. The Pakistan Rugby Union held a press conference the day before the opening match, which was well covered by electronic and print media.

Both matches will be played at the Punjab Stadium in Lahore, starting at 7:30 p.m. local time. Public entry is free and all officials and players present at the press conference warmly welcomed Lahoris to come and experience the excitement of international rugby in their own backyards.

Moreover, Pakistan captain Hammad Safdar and PRU president Arif Saeed encouraged the public to come to the stadium to support the national team in these crucial matches. Matches will also be streamed live on Asia Rugby’s Facebook and Youtube pages. Click the link below to see all the action LIVE:
https://www.asiarugby.com/videos/

Baltimore County’s most expensive home is back on the market