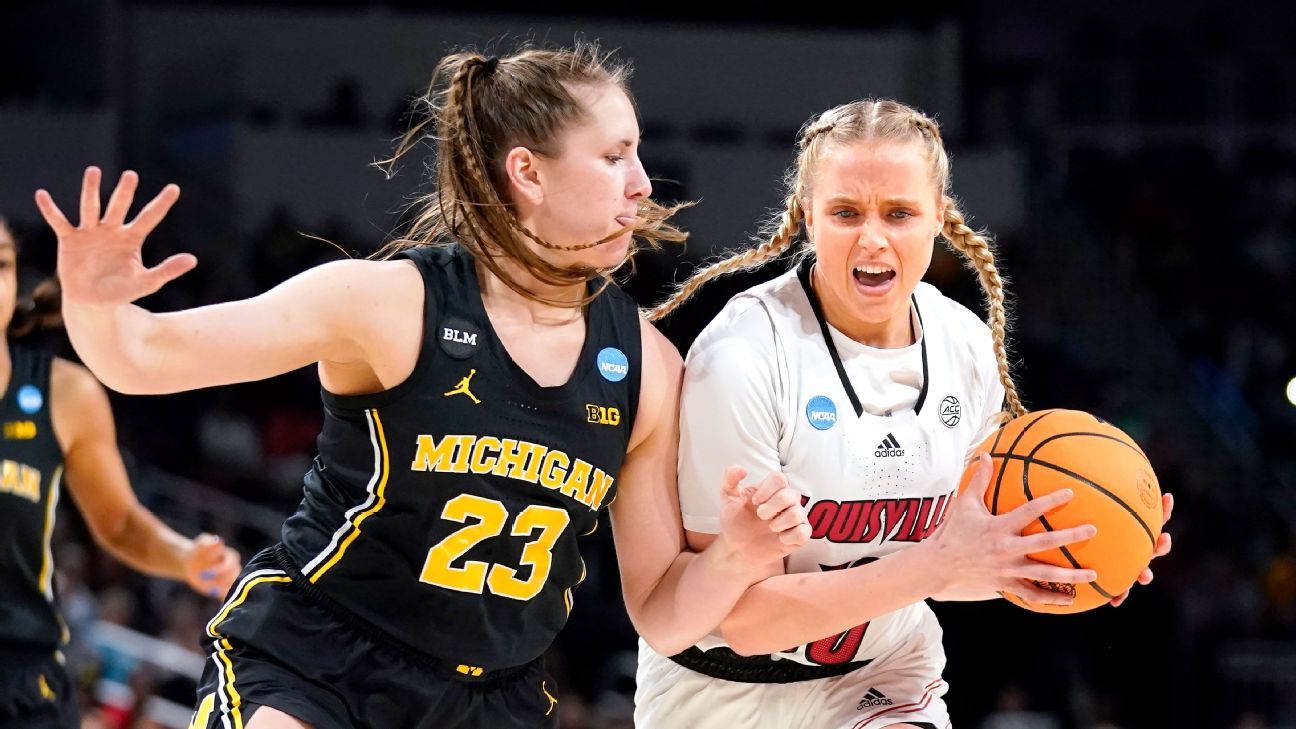 WICHITA — With 5 minutes and 40 seconds remaining, the Michigan women’s basketball team was within two points of Louisville with a trip to the Final Four on the line. slammed the door on Wolverines hopes.

A No. 1 seed in the ACC suffered from Elite Eight heartbreak on Monday, but the other is heading to the Final Four.

Louisville, the top seed in the Wichita Regional, held off a third-seeded Michigan team making their first appearance in the Elite Eight. With the 62-50 victory, the Cardinals are heading to their fourth Final Four; they lost in the championship game in 2009 and 2013 to UConn, and in the semifinals in 2018 to Mississippi State.

“52-50 with the ball – I’m going to have nightmares about this for the next eight months until we play again,” Michigan coach Kim Barnes Arico said of the Wolverines without a score since 5:40 a.m. . “Louisville is a great team. They did what they do best: they forced us to make turnovers, which earned them easy points.”

Indeed, defense has been what the Cardinals have done best this season. But they also had a strong offensive tournament from second-year guard Hailey Van Lith, who led the Cardinals with 22 points on Monday.

She is the first female player from Louisville to play in four straight 20-point games in the NCAA Tournament. Van Lith was named the region’s most outstanding player; Louisville is 11-0 in games where it has scored at least 20 points.

“Our kids – how hard they’ve put in,” Louisville coach Jeff Walz said. “We had to keep. We ended up turning them over 22 times and being 24 points behind those turnovers. [Michigan] extremely well guarded in the half court as well. It was a tough game to score.”

When the Cardinals and Wolverines met Dec. 2 in Louisville, it was no contest. The Cardinals dominated every aspect of this game, winning 70-48. And at least in terms of personnel, there hasn’t been much change in either team almost four months later. But Monday’s game was very different.

While many eyes were on the double-overtime drama at the Bridgeport Regional involving No. 2 seed UConn and No. 1 seed NC State and won by the Huskies, Louisville and Michigan battled for a first half that ended with the Cardinals up 30-27.

And though it looked like Louisville was in control for most of the game, the Wolverines were never far behind. Led by All-American senior postman Naz Hillmon, Michigan won the rebound battle — something the Wolverines failed to do in December.

Still, in the final minutes, Michigan just couldn’t find a way to break through Louisville’s defense.

“I think the biggest thing we wanted to do at that point was really try to execute and not turn the ball around,” Hillmon said. “They did a really good job of trapping at random points, putting a lot of pressure on the ball handlers.”

Hillmon finished with 18 points and 11 rebounds, his fourth double-double in this NCAA Tournament. Many expect her to make the WNBA Draft in April, but she has the option to return for a fifth “super senior” season. She has yet to indicate that she has made a decision after Monday’s game.

“I really focused on what was ahead of me. I need some time to think about that,” Hillmon said. “When you reach the Elite Eight – something Michigan women’s basketball has never done before – and deep in your stomach you know that was a run you want to retake, there will be a thinking, and I’ll make him think about it.”

As for Louisville, the Cardinals finished behind NC State in the ACC and were upset by a last-second shot from Miami in the league tournament quarterfinals.

“I think the Miami game made us lock in a little bit more when it comes to the fourth quarter,” said senior hitter Emily Engstler, who led Louisville with 16 rebounds and six steals.

Now, the Cardinals are the last ACC women’s team standing. The other three teams going to Minneapolis all have at least one NCAA title; the cardinals are looking for their first.

“It’s electric. It’s like we’ve accomplished something amazing,” Engstler said. “I really think this team can go to a national championship and win it.”