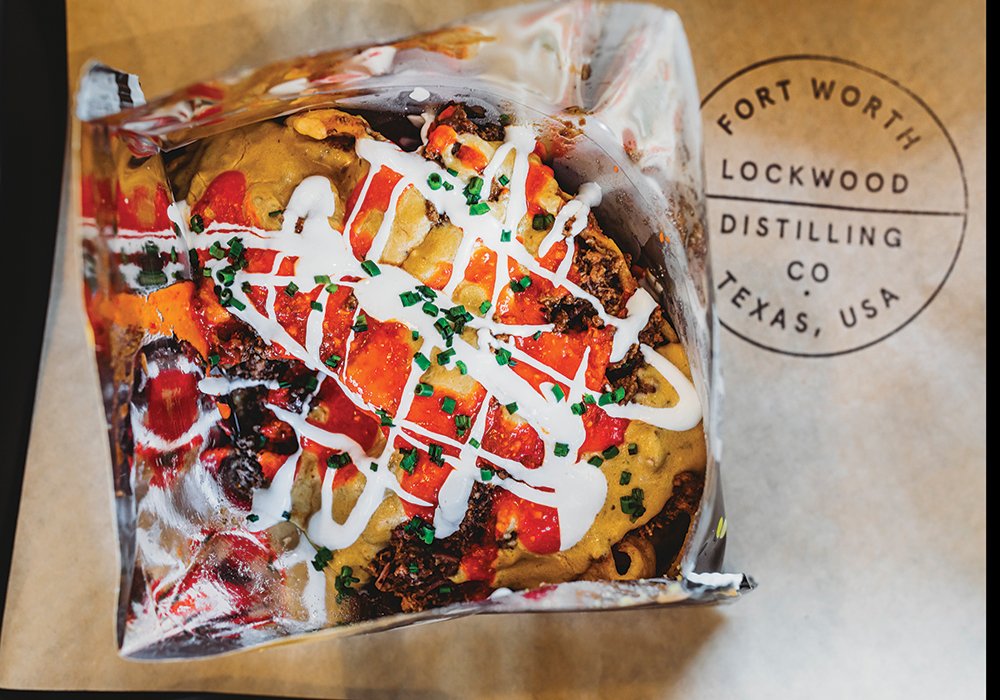 Lockwood Distilling brings spirits and sandwiches to the Near Southside

A funny thing happened when Evan and Sally Batt opened Lockwood Distilling Co., their new liquor distillery on the Near Southside: A lot of people thought it was a locksmith.

“You know, Lockwood, locksmith,” laughed Evan. “Doesn’t help that space really was once a locksmith.”

What’s even funnier: now it still does.

“So many people came to us asking if we were still making keys, we decided to buy one of those do-it-yourself key-making machines,” he says. “Not a bad way to bring people who’ve never heard of us here for a drink.”

In time, no doubt, the pair will be best known for making spirits and food, not keys. Opened in mid-November last year, Lockwood is the latest distillery to open in a town seemingly in love with them. Both bar and restaurant, it’s a spin-off of the Lockwood Distillery Co., which the couple opened in 2019 in Richardson.

Months after the original location opened, however, the pandemic hit, forcing the couple to rethink their business, back and forth.

“We panicked, but we didn’t shut down,” Evan says. “We just went into full transition mode and started making hand sanitizer for frontline and healthcare workers. We didn’t have to let a single person go. We have trained our waiters to become storekeepers and bottlers.

In the meantime, the distillery’s reputation for its small batches of homemade spirits continued to grow. It didn’t take long for Lockwood to gain a following for its Straight Bourbon and Straight Rye, Texas Style Gin, flavored rums and a pair of vodkas – one regular, the other hibiscus flavored.

“You can put it in coffee or in your milkshake,” says Evan, who has worked in the spirits and wine industry since graduating from college. “Or you can drink it straight, on ice or bottled – but you’re drinking something straight.” (Currently the spirits are made at the Richardson site and shipped to Fort Worth; Evan says they will begin production at the Fort Worth store this year).

The distillery’s popularity sparked the couple’s expansion into Fort Worth’s Near Southside, an area the two immediately fell in love with.

“We became obsessed with it,” Evan says. “We immediately knew it was the right place; this is the atmosphere we are looking for. New Orleans has always been a big inspiration to us, and the Near Southside has the same feel – cool, independent businesses next to a neighborhood full of cool old houses. It made no sense for us to go anywhere else.

Developed by Julio Ortiz, currently executive chef at the Richardson location and whose resume includes stints at the Ritz-Carlton and Knife Steakhouse, the food menu is comprised of sandwiches, salads and other light bites inspired by by the chief.

The pastrami sandwich is particularly good. “The pastrami brines for nine days in gin,” says Evan. “We cut off the ends and make chili”; fans also adore Lockwood’s bologna sandwich, the meat of which is smoked for hours.

Elsewhere on the menu, there’s a poblano and chili cheese sandwich, various dips, and other small plates meant to be paired with Lockwood’s cocktails.

“We make our own chili cheese, our own white bean dip, the chutney that goes with the turkey sandwich,” says Evan. “It’s our version of hearty southern-style food.”

Lockwood also offers a handful of vegetarian and vegan options, including a vegan hot dog.

“Community outreach is a big part of what we do,” says Evan. “We love working with local businesses and finding organizations that could benefit from support. I think one thing that sets us apart from other distilleries is that we are very active in the community. You will see us often in Fort Worth.