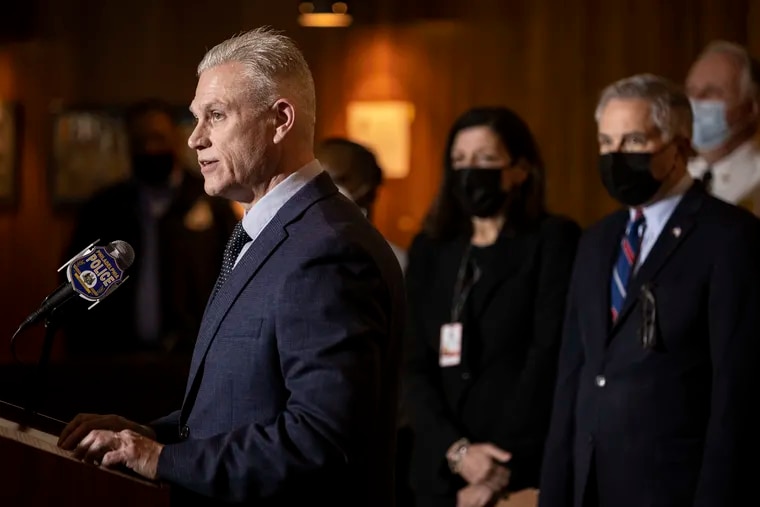 Jonathan Akubu, suspect in a carjacking ring, charged with two murders in Philadelphia

A 28-year-old man who police say ran a loosely organized carjacking ring has been charged with two murders and two shootings as part of a week-long criminal rampage – and investigators are looking to whether his group is linked to dozens of other crimes.

Jonathan Akubu of Drexel Hill was arrested Saturday in connection with the fatal carjacking of a 60-year-old man killed Feb. 6 in northeast Philadelphia. He is also accused of killing another man, a 28-year-old car locksmith, less than a week later in the city’s Eastwick area.

Detectives have used ballistics and cellphone recordings to connect Akubu to at least five incidents over the past two months. He was arrested at an apartment in Lansdowne, where police found a stolen handgun and an AK-47 type rifle.

Akubu is the only defendant charged in each case so far. Homicide Captain Jason Smith said Tuesday that investigators believe his carjacking operation targeted Toyota SUVs and involved at least three other people in their teens or early 20s who are at large.

Detectives were examining up to 40 cases for potential links, law enforcement sources said, and were also investigating the possibility that some of the stolen vehicles that were not found were shipped overseas.

Officials declined to comment on that theory at a Tuesday morning news conference. But they held up the case as an important example of law enforcement working together to address the city’s gun violence crisis.

“To anyone looking to wreak havoc in our city,” said Mayor Jim Kenney, “Let’s send the message today that we simply cannot tolerate these acts of violence.”

Akubu is being held without bail on a litany of charges, including multiple counts of murder, aggravated assault, conspiracy, robbery, theft and unlawful possession of firearms. He didn’t have a lawyer listed on Tuesday.

Carjackings have risen sharply in the city, with 203 reported in the first seven weeks of the year, according to police statistics, nearly seven times more than those reported on the same date in 2020 and more than throughout 2017. Other cities, including New York and Chicago, have also seen carjackings soar.

Police said they believe many of the incidents appeared to be crimes of opportunity, with cars recovered shortly after being stolen and likely used in rides or other crimes. But in some cases, authorities say, newer cars have been stolen and not recovered. And investigators were looking for potential links between the thefts of a handful of Toyotas in northeast Philadelphia in recent weeks.

Commissioner Danielle Outlaw said Tuesday that police have created a dedicated carjacking investigation task force and are working with state and federal authorities.

“I refuse to accept that what’s happening here is OK,” she said.

Smith said investigators, using ballistics, linked Akubu to incidents dating back to at least December 27, when a 25-year-old man was shot in the shoulder during a carjacking on Greenway Avenue, in Southwest Philadelphia.

The man’s Toyota RAV4 and a handgun were stolen, and the gun was later found in Akubu’s apartment. It is the same one used in the two murders he is accused of, police said. Akubu was charged with receiving stolen property in the Greenway Avenue case.

A week later, several men attempted to take a Toyota Highlander from a man in the 8400 block of Lyons Place in southwest Philadelphia. One of them shot the 42-year-old driver in the leg as he tried to flee. Akubu is charged with aggravated assault in connection with this incident.

READ MORE: Carjackings in Philadelphia are at an all-time high. Officials don’t know why.

He faces similar charges stemming from an incident a week later. On February 4, on the 7600 block of Elmwood Avenue in Eastwick, a 45-year-old woman parked her Toyota RAV4 and was approached by three men who attempted to grab her bag. When a man inside a nearby house opened the door, police say the attackers shot him and then fled in the Toyota.

Two days later George Briscella, 60, was shot and killed in the 2100 block of Afton Street in Rhawnhurst. Three men ambushed him and stole his 2022 Toyota RAV4 around 8 p.m., police said, shooting him in the stomach.

Briscella, a Marine Corps veteran and grandfather, was heading to his mother’s house to use his printer, police said. Attempts to reach relatives for comment on Tuesday were unsuccessful.

Police found his vehicle in Southwest Philadelphia around 7:30 a.m. on February 12. Less than 12 hours later, officers responding to a shooting in the 8100 block of Grovers Avenue found Aiah Gbessay dead with three gunshot wounds to the head. A witness told investigators the shooters fled in a white van.

Minutes later and three blocks away, officers found a white pickup truck engulfed in flames. Investigators later learned it belonged to Gbessay, Smith said, and they believe Akubu set it on fire.

Police sources said Akubu and Gbessay knew each other. Cellphone records suggest the pair were in contact minutes before the murder, according to court documents.

Gbessay’s older brother, Francis Sankoh, 32, said Gbessay ran his business as an automotive locksmith in southwest Philadelphia, printing or programming keys. He said Gbessay was extremely conscientious and went to technical school to learn his trade.

Family members speculated as to why he might have been killed, Sankoh said: possibly an argument over a specific job. But he did not believe Gbessay was part of the alleged carjacking operation.

“He’s not the kind of person to interact with this kind of activity,” Sankoh said.

Sankoh said his brother’s wife and 11-year-old son had recently moved to Philadelphia from their native Sierra Leone and were devastated by his murder.

“No one deserved what happened to my younger brother,” Sankoh said. “He has a son and now the son will grow up without a father.”

Akubu has multiple arrests in the past, records show, including in Chester County in 2020 on charges that included stealing a car. But nearly all of the charges were dismissed by the city court, records show. It wasn’t immediately clear why. Akubu pleaded guilty to a summary charge of harassment, records show.

Years earlier, Akubu pleaded guilty to committing a 2013 aggravated assault in Southwest Philadelphia. According to the charging documents, he shot someone in a car using a firearm he was prohibited from possessing. He was sentenced to 38 to 96 months in prison plus 17 years probation, according to court records, and in 2018 was returned to prison for violating his probation.

In 2015, Akubu filed a federal lawsuit against the city, alleging that a prison guard beat and bit him on the head while he was handcuffed, an incident that was reported. captured on CCTV. The city settled with Akubu for $99,999, which was paid in November 2015.

EXPLAINER: A look at the toughest US sanctions Russia faces | Latest news from WDEL