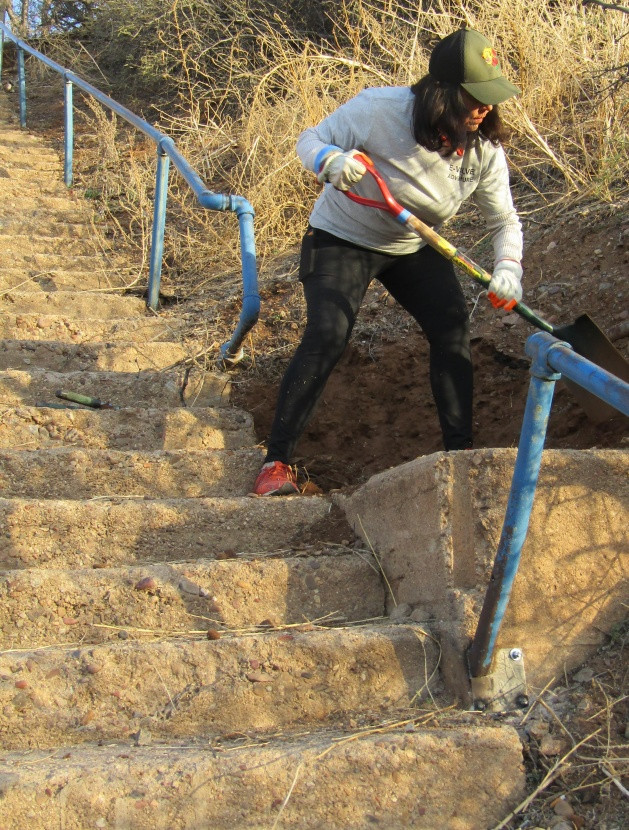 Last Saturday morning, a group of community volunteers came out to clean Globe’s Silver King Staircase. Weeding and trimming the trees, they came to prepare the historic staircase for a climbfuture beautification – one of twelve public art projects a local organization has planned.

This organization is “I Art Globe”, their goal is to instill hope in the community after two difficult years, and public art is their medium. To accomplish its mission, I Art Globe plans to install 12 public art projects in the city in 12 months. Two of them, the beautification of the staircase and an exterior mural project, are currently underway and the call for artists has been issued for both.

The Silver King staircase project – for which artist submissions are being accepted until midnight January 31, 2022 – is part of an urban trail that I Art Globe hopes to create; named Stairizona Trail, it will showcase five of the city’s historic stairways. Dr Thea Wilshire of I Art Globe said the Stairizona and a planned trail in the historic town center would meet a community need for outdoor activities while serving as an economic driver.

“This will be the first of many cleansesUPS on this staircase,” said Regina Ortega-Leonardi of I Art Globe, who leads the staircase project, Saturday morning. Wielding a shovel to clear space next to the Silver King stairs, she discovered a concrete platform that she thought might make a good place for a bench (I Art Globe received a grant to buy benches for the path). Poppies are the theme of the Silver King art project, and Ortega-Leonardi said the group is in conversation with artists in Arizona and out of state. “We saw some really cool design ideas,” she said. The organization is working with the City of Globe and other community partners on the stair project, another aspect of which is making the handrails on the Silver King stairs ADA compliant. To this end, I Art Globe works with local artist/metalworker Jim Ohl; their plans also include the installation of lighting. “We’re helping restore those stairs so people can use them safely,” Ortega-Leonardi said.

The call for applications is open to all amateur or professional artists (local, national and international), working in all media. Entrants must be 18 or older to apply. Artists should submit artwork proposals to Ortega-Leonardi in person or via email at [email protected] by midnight January 31, 2022. For more information, contact the Globe Historic Staircase Urban Trail Project hotline at (808) 373-0032.

I Art Globe is also seeking artist submissions for its mural project, inviting ideas that “Celebrate Globe” – which could include local history, wildlife, natural resources, people, industry or other distinctive images of the region. The group examines up to five murals, with designs chosen by the participating business owners. Artists will submit design mockups and business owners will submit potential walls to the I Art Globe committee, which will review artists’ ideas and then share them with businesses, without initially revealing artists’ names. If a location is within the downtown Historic Preservation District, it will be reviewed by the Historic Preservation Advisory Board before painting can begin.

Wilshire, who leads the mural project, said the group is curfor rent confirm wall locations and respond to questions and interest from artists. “We want the walls with the most positive impact,” she said, adding that the project has generated strong interest. “I think that (the murals) is something that people recognize.” Selected artists will receive $3,000 for their work, with funding from I Art Globe, local businesses and community members. Wilshire said the latter included Globe resident Peter Beesley, who donated funds for the mural project honoring his late wife Carol “Ginger” Booth Beesley.

The deadline for submitting mural projects is February 14, 2022. Winning artists will be notified on February 21, and installation of the project will take place from February 22 to March 31, 2022. Participating companies agree to leave the murals in place for at least two years. . To submit or learn more about the project, visit the I Art Globe Facebook page at https://www.facebook.com/iartglobeaz/.

Wilshire said another I Art Globe project, his proposed alley activation, is on hold as they focus on murals and stairs and it faces opposition from local businesses. Wilshire said that according to City of Globe staff, every business owner along the aisle must approve the project, and I Art Globe was unable to obtain such unanimous approval. “Maybe it’s not the right time for this idea,” she said.

Other potential projects are advancing, however. Wilshire said the group worked with the Globe Downtown Association, the Gila County Historical Society and graphic designer Tanner Hunsaker to create a multi-panel timeline of the city’s history. Other ideas include a screening of the documentary film “Believe”, about Olympic archer Brady Ellison, as well as a personal appearance by Globe resident Ellison, and a collaboration with the US Forest Service to bring related art to nature at AZ Poppy Fest 2022 this April.