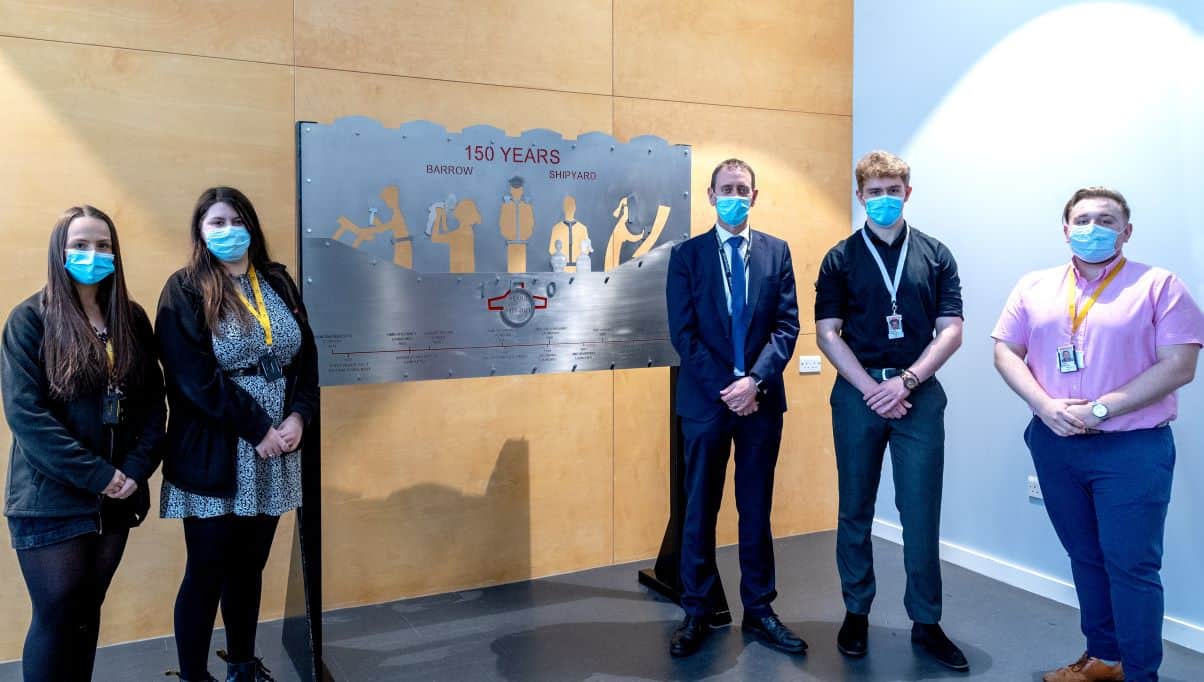 A book commemorating 150 years of the Barrow shipyard has been unveiled.

Scheduled to be displayed in Barrow this year, it depicts the region’s shipbuilding heritage through the men and women who worked in the dockyard, the community the company served for a century and a half and the the shipyard’s long-standing partner, the Royal Navy.

The piece was unveiled by Steve Timms, Managing Director of BAE Systems Submarines.

He said: “It represents so much that has happened in our proud history. The timeline of major events, pioneering technological advancements, and the ever-changing employee landscape as more and more female workers have taken on traditionally male roles.

“The Royal Navy personnel at the center represent and pay tribute to the key and cohesive bond we have with the Royal Navy and the UK Government, a relationship that will hopefully continue for many years to come.

“It also highlights the role of our apprentices. They are the future of this company and their talent, skill, creativity and hard work resulted in the design of this fantastic piece and then turned it into reality.

The design was selected after a competition among apprentices from the shipyard’s Submarine Academy for skills and knowledge.

Academy Director Janet Garner was impressed with the level of all entries in the competition, saying: “These apprentices were all relatively new to our business and worked under adverse, remote conditions to produce presentations and high quality designs.

“The level of work was phenomenal and the pride shown by everyone was excellent. This is a testimonial from our Early Careers community.

Georgia Cooper, a fourth-year project management apprentice, who was heavily involved in the project, said: “I am so happy that the statue is complete and that those involved have been able to see their hard work come to fruition. . It was important for us to involve the whole company.

Apprentice designer Chloe Struckman said: “It’s been a great use of all the skills I learned during my years as an apprentice. I have had the opportunity to communicate with all areas of the business and have worked closely with a number of operational teams which has been great for my own development. »

Apprentice sheet metal worker Stephen Coulter said: “It was an honor to work on the project, we enjoyed coming up with the concept. I’m proud to see it come to life. »

Skills development coach Shaun Hannaway, who came up with the initial concept for the project, said: “It’s amazing to see so many different people, both in our early career demographic and in the business as a whole. broad, to be involved in this project.

“During the initial start-up discussions, it was beyond my wildest dreams to see the project grow to such magnitude. I can’t wait to see the statue in place.