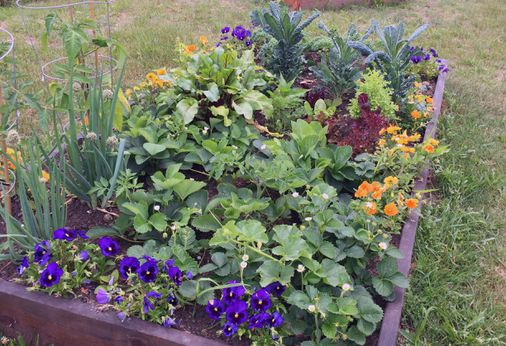 After another green season, the Hull community garden is covered for the winter

A year ago, a gardener covered his plot with cardboard, she noted. Even this helps provide thermal protection against the cold.

A layer of organic matter creates an environment that is good for the soil and beneficial for beneficial insects. “Your garden should have bugs,” Dorner said. “People panic when they see bugs in the compost or the soil.” In fact, insects are a sign of life in the dirt.

Gardeners should pull out any weeds that grow in their plots, she advised, composting “whatever you can, but nothing sick. If the plants are sick, throw them out. And don’t let the weeds sow.

Almost a decade ago, she said, a small group began the process of creating Hull’s first community garden.

“We made it a nice space to grab attention,” Dorner said. “Gardening is more of an art than a science.

In the summer of 2012, a small group of residents met with the CEO and elected officials to get the ball rolling to create a community garden for those who lacked garden space at home and to help beautify the city.

Dorner said she enjoyed seeing community gardens in other cities and believed Hull could benefit from them. “I have always been intrigued by community gardens. I loved browsing them, ”she said.

Future gardeners feared that in a community of relatively small houses, condos, and open space, finding a garden site would be a challenge. But city officials warmed to the idea and came up with a city-owned location, the site of the former Showboat nightclub on George Washington Boulevard, the city’s main thoroughfare.

It would be an ideal site, the gardeners and officials agreed. The property had been connected to the public water supply network since the previous use of the site. The land was flat and the site was accessible by public transport.

A little green floral beauty, insisted the founders of the project, would be a cheerful welcome for motorists driving in the city.

The city also offered funding to start the project, Dorner said. “We got the land for free,” she said, but the new group had to take out insurance and cover expenses such as fencing and the cost of building the raised beds.

“We started to build,” Dorner said. “It was truly a community effort.”

The ground secured, the founders of the project called for reinforcements. “Six guys with power tools came in and put the boxes together,” Dorner said.

But something was wrong with the original raised beds layout, according to a friend who was viewing the site from a balcony. Arranged end to end, the 25 raised beds in the space seemed “too linear for a garden”. Appreciated by the problem, the manufacturers made adjustments.

“They changed the layout to something resembling a flower pattern,” Dorner said. “Something more organic.”

The arrangement left an open space in which to plant a few trees, a native beach plum and elder, blueberry and raspberry plants, and a few other native perennials.

With 23 community gardeners, the Hull Community Garden has so far been able to find land for all those who wish to join. Member Gardeners grow many vegetables and fruits commonly grown in the New England climate: tomatoes, peppers, herbs, onions, beans, green vegetables, eggplants. Some people, Dorner said, are trying something “fancier.”

Given its location in full sun and the sea breeze, she said, gardeners “have to be prepared to be careful and keep it watered.”

The community garden pays for its water. Individual gardeners pay an annual fee for their plots, $ 25 for smaller plots, $ 50 for larger ones. The fees also pay for expenses such as “a huge load of compost” acquired each year from a landscaping company.

When the growing season arrives each year, the city’s community gardeners do their own work at their own pace, Dorner said. But they come together for one major event – the annual Harvest Dinner – which takes place in August.

Even people who don’t want to be gardeners, she says, want to be invited to this dinner.

Robert Knox can be contacted at [email protected].

Gwynedd and Anglesey plan among 24 in Wales to share £ 193,000 to celebrate local heritage

Did a Reddit user find treasure in his grandparents’ barn?