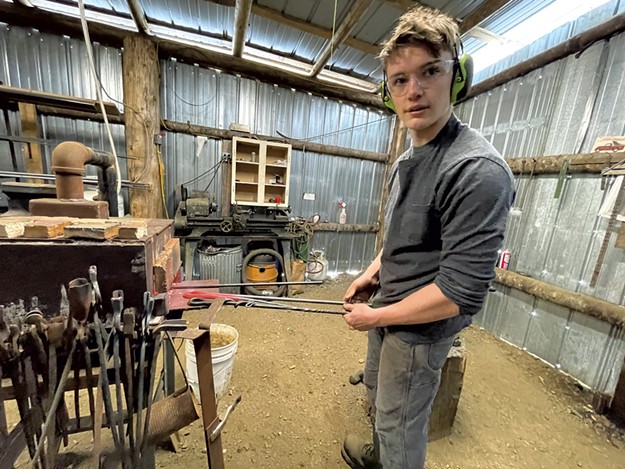 Alder Hardt pulled a bright yellow rod from his forge, set it on an anvil, and hammered a U-shaped bend into one end. When the steel rod was cold, Hardt warmed it, then clamped it in a vice. Working with a hammer and pliers, he wrapped the short leg of the U around the top of the rod, like a coiled snake on a tree branch.

With each twist of the metal, bits of iron oxide flake off, briefly creating a black and orange pattern resembling the marks of a corn snake. This flaking process, called “scaling,” is an inevitable part of the forging process and reduces the mass of the steel being worked by about 1%, Hardt said.

After repeated cycles of heating, hammering and reshaping, Hardt added the finishing touches to the fireplace poker: an S-shaped hook on one end and a decorative leaf on the other. Then he got out and plunged the hot steel into the snow with a sizzle. Back inside, he scrubbed the cold metal with a wire brush to remove the remaining iron oxide, then scrubbed it with preservative vegetable oil.

In the time it took Hardt to explain the whole process, the 16-year-old had forged two fireplace pokers, which he sells online at Alder Hardt Ironworks for $60 to $70 each. Not bad for 30 minutes of work during the February school holidays.

Hardt started blacksmithing when he was 12 years old. Since then, he has earned a reputation in the Northeastern Kingdom as an accomplished metalworker with skills far beyond his years. As a sophomore at Hazen Union High School in Hardwick, he created his own successful home-based business website.

In his spare time, Hardt invariably finds himself in the studio he built himself on his family’s property in Wolcott, where they moved last October. There he works with a passion that burns as hot as the carbon steel he shapes.

The son of a commercial forester, Hardt began working with tools and machines at an early age. “I was cutting kindling and sawing boards when I was 5. I used a chainsaw when I was 6,” he said during the recent visit by a reporter. .

Hardt was 8 years old when he attended his first blacksmithing demonstration in Shelburne Museum. According to his mother, Katrina, the boy was so engrossed that the blacksmith made him a keychain out of sheet iron to take home.

When Hardt was 12, during a year of homeschooling, he built himself a crude forge in the ground using a pipe, bricks, and a pile of coal. He fashioned a pair of knives from an old saw blade and overheated them in the forge until they melted.

Undeterred, Hardt found another piece of scrap metal, heated it, and pounded it with a hammer against a vise. He was so fascinated by the process that, according to Katrina, he built a new forge out of an old wheelbarrow and a shop vacuum that he retrofitted to blow air like a blast furnace.

Hardt didn’t even own an anvil at the time; he used a small section of railroad.

Still, the teenager came to the apprenticeship knowing many of the basics of blacksmithing, Avery recalls. Hardt just needed to broaden his experience and learn advanced skills.

“Alder was just super inspired to do it,” Avery added. “He had already got his hands dirty and had jumped in them.”

Soon, Hardt was doing what traditional blacksmiths had done for centuries: forging his own tools, including a pair of rough-hewn, Thor-esque hammers he still uses. He also made chisels, awls, axes and pliers.

“You can buy a pair of pliers online for around $50,” he said. “Or you can make them yourself in less than an hour.”

This do-it-yourself philosophy motivates Hardt. Last summer, he built himself a blacksmith shop – his second – which cost him virtually nothing but equity. For the structural beams, he cut and skidded logs on the family property. For the walls and roof, he used salvaged metal sheets he found on the Front Porch Forum. He did his own electrical wiring, noted his mother, and documented the process for a school project.

“He was able to integrate his schoolwork with his passion for blacksmithing,” Katrina said.

Inside, the dirt-floored store is airy, with a large American flag hanging in one corner and tools, belts, grinders, and safety gear on the walls. A space between the walls and the roof evacuates heat and exhaust gases.

In the past, Hardt says, he used coal to fuel his forge. But, in addition to leaving it covered in soot, the coal heated unevenly and had to be constantly raked during forging.

So last year, Hardt built himself a propane forge. Although gas costs more than coal, it heats faster, burns cleaner, and distributes heat better, allowing it to work with larger pieces of steel. The homemade forge can reach 3,200 degrees Fahrenheit, he said, more than hot enough to melt carbon steel. Without a thermometer, Hardt measures the temperature by the color of the flames.

His blower is an old hair dryer.

“I’ve always used a hair dryer in my forges,” he explained. “It’s kind of funny, but they work really well. I don’t see the need to go out and buy a $50 forge blower.”

Next to the forge stands Hardt’s anvil, mounted on a large tree stump. Behind it, in one corner, is a contraption that looks like something rusty pulled from a pile of junk. In fact, it’s a power hammer — faster, more powerful and more precise than its manual counterpart. A new power hammer costs between $2,500 and $15,000, but Hardt cobbled together this one last summer from salvaged parts, including an abandoned railroad track he dug up near his school.

His most ambitious projects include a 4-by-12-foot wrought-iron barn ladder he built for Steve Fortmann, co-owner of Ghost Dog Dairy in Hardwick, who was Hardt’s college football coach. At several hundred pounds, it was Hardt’s largest and most “architectural” piece, he said.

Fortmann was so pleased with the work that he commissioned Hardt to also build wrought iron railings – with a nautical theme, as he and his wife, Kathy, are Navy veterans.

Fortmann said he never doubted the teenager’s abilities. Once, he recalls, Hardt showed up at his house on a homemade snowmobile he had built from a riding mower and a pair of skis.

Since then, Fortmann has hired Hardt four or five times to repair broken farm machinery, including an old rotary rake. Replacing it would have cost $20,000 or more.

“It’s nice to have someone who can fix metal quickly, especially in the summer,” Fortmann said. “He’s a good example for other kids of what you can do at a young age…instead of [playing] video games.”

Hardt also improved the efficiency of other local businesses. Nina Livellara, who co-founded Local Donut in Woodbury with her husband, Nate Doyon, discovered Hardt’s work at the farmer’s market. She ordered several items for her home. Hardt mentioned his interest in doing larger custom orders, piqued by the curiosity of donut makers.

“Nate had dreamed for two years of buying a large frying pan for our bakery,” Livellara said. “Alder, being young and entrepreneurial and very dedicated to craftsmanship, was up for the challenge.”

The couple could have purchased an industrial fryer online for less and gotten it sooner, Livellara noted. But their business plan is to work with local food producers, artists and artisans to “keep the money in the Vermont economy.”

Although Hardt has never built a donut fryer, he delivered the order a few weeks ago. Already, it has doubled the production of bakers.

At the end of this month, Hardt will finally be able to deliver his products to his customers himself, provided he passes his driving test and obtains a license.

Although he clearly takes pride in his work, he hasn’t let the attention or the accolades get to his head.