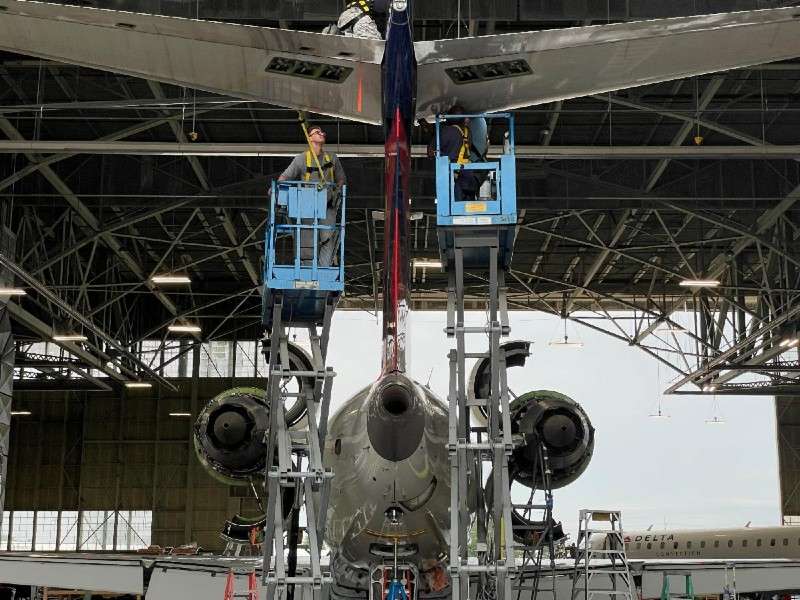 An old-school go-getter has garnered national attention for his customer service in the aviation maintenance, repair and overhaul industry.

Fast, detailed and accurate work is a must at 1 Vision Aviation which has grown to global prominence, thanks to the approach, attitude and people of owner and CEO Jimmy Sponde.

“It’s quality work done in a timely manner, getting the plane back into the sky before anyone else,” he said. “We understand airplanes don’t make money sitting on the ground.”

The growing company, based in Sioux City, Iowa, which opened a successful expansion in Salina in September 2019 – was listed in March as one of the top 10 aviation MRO companies in the United States, by Aerospace & Defense Review, a national trade magazine.

This distinction has instilled pride in the growing company that endures despite the difficult times.

Salina’s operations are concentrated in a 130,000 square foot hangar nicknamed “Big Bertha” where up to six Boeing 737s can be brought inside for repairs and other concurrent services.

Up to two dozen jets typically ring at Big Bertha where they are stored or waiting to be serviced. Some jets were flown to north-central Kansas from France, Ukraine, Mexico and Australia.

It opens with the story of a memorable experience for the company in 2017 when an American Airlines flight hit a deer while taking off in Charlotte, North Carolina. A technical team from 1 Vision responded quickly “and got the aircraft into service within two days, which was incredible considering the damage it had sustained,” the story reads.

Being “one of the fastest on the scene,” Sponder said, is what sets his crew apart.

The headstrong company founder finds unique ways to solve problems, such as buying an eight-bedroom house in Salina when 1 Vision expanded there. Those digs, where Sponder and his wife, Robyne, also live, eased housing shortages for up to 14 of his first 35 workers. All of them, by the way, are considered family.

As Salina and Saline County leaders worked to add labor housing to the booming economy, Sponder himself envisioned a foray into real estate that would lead a number of employers to fill the gaps of workers.

This list from 1 Vision Aviation has grown to 250 spanning two shifts, with a target of four times as many workers.

Hiring skilled airframe and power plant mechanics presented challenges, and some of its workers opted for flight school and pursue careers as commercial pilots.

To improve his chances of hiring more, Sponder’s company includes an apprenticeship program. Three in April completed the necessary on-the-job training, obtained Federal Aviation Administration approval to test certification, and passed. A total of 20 have been licensed to date. Six more are in progress.

“The FAA has to approve them to test. They look at training records to see if they’re capable,” Merritt said. “(1 Vision workers) are always ready to grow in the company.”

A 1 Vision employee since 2019, Jabier Martinez completed his cell and central certification on April 8.

He collected on-the-job training cards with each project and had them signed by a certified A&P. After 18 months in the program, credited with his experience in the US Army, Martinez passed his test and today works as the avionics manager of 1 Vision in Salina. He came with a “big raise and a sense of pride. Jim was willing to trust me to do my job professionally. He places great trust in his men. »

A long association with Sponder and Vice President of Operations Kevin Boyer, prompted Doug Gann, a former sheet metal worker for Boeing and Cessna and Director of Operations at Gulf Stream, to seek employment with 1 Vision. He also entered the apprenticeship program 18 months ago.

“Having my A&P opens a lot of doors. I want to grow and become a project manager,” Gann said. I’m not looking anymore.

Having his A&P certification is empowering, he said.

“When you see this plane take off after a heavy check, you realize you had something to do with it,” Gann said.

He is definitely a supporter of 1 Vision learning.

“People who don’t have a lot of experience can come and get their license,” Gann said.

After learning that it’s common for A&P mechanics to retire early and move to Florida, Sponder stuck to his mantra and hatched a plan for 1 Vision to soon open an MRO division in the hot state and sunny from the beach.

“We get a lot of calls from people wanting to work in Florida,” Sponder said.

But there is a catch that he says will help develop staff elsewhere.

“To get to Florida, you have to pay your dues and prove yourself in Salina or Sioux City,” he said. “Senior managers who want to leave must train their replacement.”

Part of 1 Vision’s strategy is to keep growing and avoid stagnation.

“That’s Jim’s style of ownership,” Merritt said. “When the business gets to where he wants it to be, he moves on and grows it even more.”

“I keep lighting fires,” he said. “When they ignite, we feed them like an afterburner and push it forward.”